....that indigo is one of the oldest dye stuffs in the world? For millennia this dye provided the only color fast and light fast clear blue that there was for fabrics. It was very valuable for trade and recipes were often closely guarded secrets. It has been used all over the world to make everything from intricate Japanese kimonos to Levi Jeans for the original 49ers.

The thing that is special about indigo is that in its normal state the dye molecules are insoluble in water, they will just sink to the bottom of the vat unless a chemical reducing agent is added. Reducing agents steal a hydrogen atom from the dye molecule, this allows it to try and form lose bonds with the hydrogen in the water so it dissolves and creates the vat. There are all kinds of reducing agents that can be used, from yeast or live bacteria in a fermentation vat to dangerous chemicals like Lye (Sodium Hydroxide). We have a somewhat safer and effective recipe using our Dye House Color remover (Thiorea Dioxide) and Soda Ash. In Europe, one of the oldest reducing agents, and the cheapest, was stale urine. Oral dye history is full of stories about European dye houses that would put out pots for people to â€œdonate" their urine and dye houses that would be built next to taverns, which provided a steady supply. It is purported that due to the smell of the dye houses they where often restricted to the outskirts of town.

This amazing dyestuff naturally occurs in indigo containing plants of the tropical genus Indigofera, which grows in many countries, as well as a less concentrated form in a plant called Woad, which is native to temperate Europe. The most well known, indigofera tinctoria, was native to India, which may have been the earliest major player in the lucrative indigo trade. The name of the compound that makes up the dye is called indican. It is extracted from the plants buy crushing the leaves and soaking them until they ferment and release the indican, which was precipitated and dried in cakes. The cakes were than ground to a powder by the user.

Designs on indigo cloth are achieved with various tying techniques, such as traditional Shibori and tie-dye techniques. Other types of resist such as rice paste and wax are also used to protect areas of the fabric to create intricate patterns. Indigo was also be used for printing and painting with use of different chemicals like Arsenic trisulfide, or iron sulfate and thickeners. 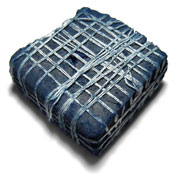 When indigo is in solution it is a yellow green color but often the top layer of the vat is blue because it is exposed to the air. Indigo is sometimes called a magic dye because of the way the fabric changes color from a yellow green to the deep blues as the air oxidizes the dye. As the dye molecules oxidize they become insoluble in water again so they don't wash out of the fabric. The fabric is dipped in the indigo vat to soak up some dye, and then hung in the air to oxidize where it turns blue. Another feature of indigo is the ability to build up the depth of color by repeated dippings into the bath. Successive dippings and airings give you darker and darker blues. Shades can thus range from pale sky blue to deepest dark navy indigo. 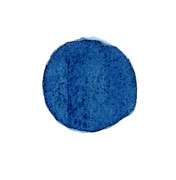 We are all familiar with the characteristic way in which indigo fades as the fabric is used and worn, such as the fade lines on your favorite jeans. This is because indigo does not actually chemically bond to the fabric. Instead it becomes insoluble in water again when it reacts with the air and becomes lodged in the small spaces with the fiber. Over time as the fibers are rubbed with wear it rubs out some of the dye creating faded lines.

Indigo dyed fabric can also do something called â€œcrocking" where it rubs off on things, and you, if not properly laundered before use. If you don't want to try out for the â€œBlue Man Group", be sure and wash newly dyed or store bought Indigo dyed fabric and clothing with hot water and Synthrapol. Our Dharma Dye Fixative or Retayne in a hot soak can cause the fabric to retain more of the Indigo before washing, so you will get less fade on the first washing, and still no crocking after. 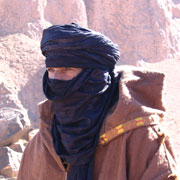 Since indigo was one of the only natural blue dyes, and the best, it was often used to over dye yellow fabrics to make greens. In museum tapestries you will often see that many plants are very bluish, this is because natural yellow dyes are more sensitive to fading from UV light than indigo and over time the indigo has become the predominate color in the fibers.

These days most indigo dye in commercial use is made synthetically, but you can still enjoy the magic of true indigo with our wonderful natural indigo. Granted it is a little more work then pre-reduced synthetics but it also has greater depth and variation which is all part of the magic.