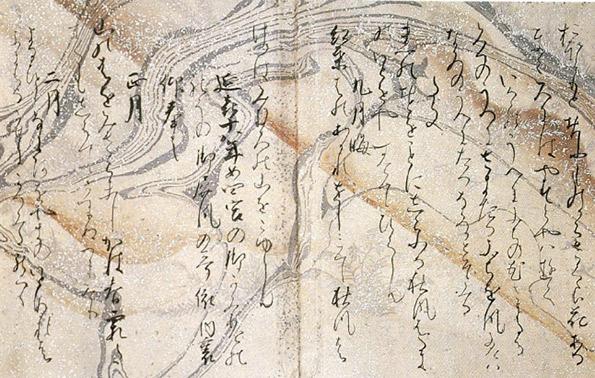 Marbling originated in Japan in around the twelfth century. Some believe it was discovered by accident by someone in the Japanese imperial family who submerged sumi ink paintings in water, watched the inks float to the surface, then put a piece of paper on the floating ink, lifted it up and preserved the image. This technique was termed Suminagashi, or "ink floating."

Another type of marbling, Ebru, Turkish for "cloud art," originated in Turkey, Persia and India in the fifteenth century. The Turkish marblers used thickened water, which was similar to the marbling solutions of today. So, detailed combed and flowing designs were possible as they are today. Some of the most amazing images have a complex combed background, then detailed images of objects like flowers, leaves, etc. that are lightly combed last into the foreground. Google images of Ebru, it's incredible!!!

During the sixteenth and seventeenth centuries marbling spread to Europe, but the trade secrets were kept that way by only a handful of people. They named patterns after their countries: i.e., Old Dutch, French Curl, and Italian Hair Vein, which are still used today. Apprentice marblers were taught only one step of the marbling process, and some were actually forced to work behind wooden partitions to keep the other workers hidden. Most marbling was used for decorative bookbinding.

Finally, in 1853, an Englishman, Charles Woolnough, revealed the secret in his book The Art of Marbling. Two years later, Josef Halfer of Budapest published Die Fortschritte der Marmorierkunst, which was translated into many languages and came to the United States as The Progress of the Marbling Art, which redefined and simplified the marbling process and created a growth spurt of marbling in Europe and the U.S. 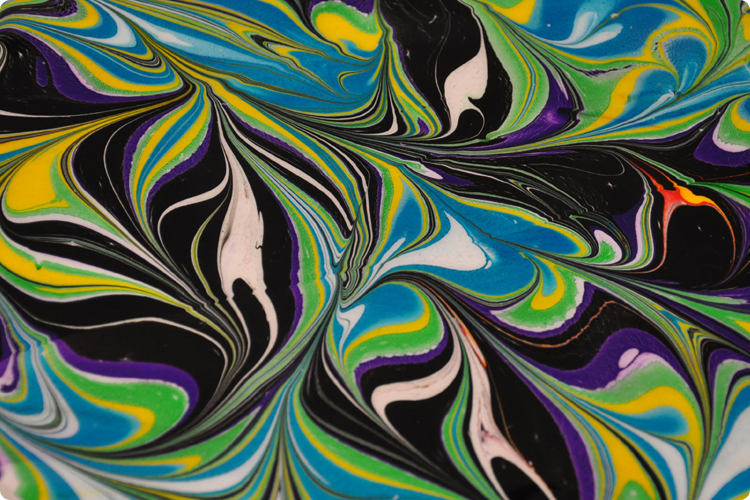 By the time bookbinders got their hands on these coveted recipes, book production had become automated with machines and fine craftsmanship was not valued over high volume. Marbling became much less popular until the 1970s, when crafts and handmade books emerged and helped renew this old art form.

Today, marbling is going strong with thousands of masters who explore and revitalize the traditional methods, bringing new ideas to this wonderful form of expression.